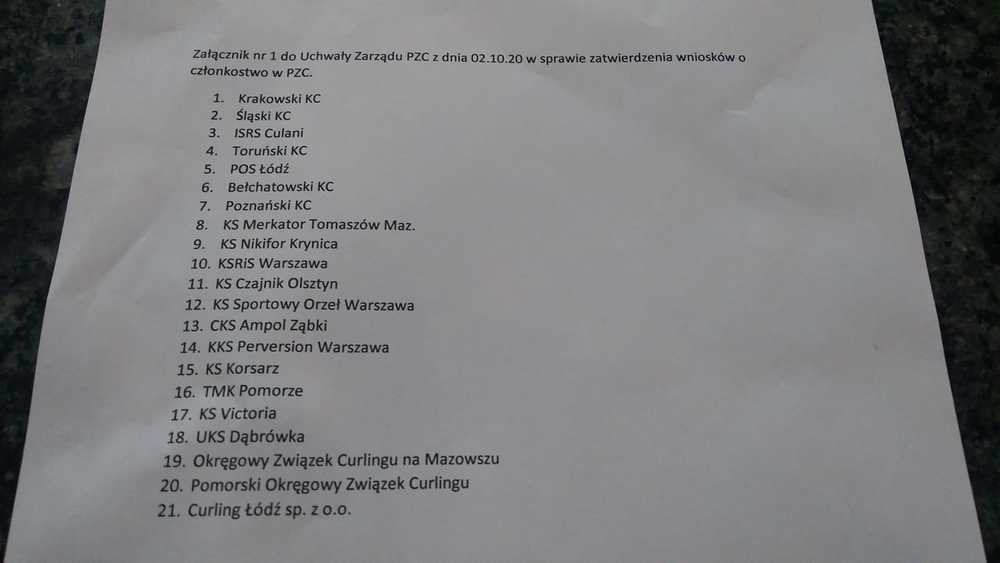 Polish curling community has grown very quickly and unexpectedly last week. On Tuesday Polish Curling Association (Polski Związek Curlingu) announced that they have admitted 21 clubs to be members. The membership means, among others, having a vote in elections appointing the board of PCA. According to an announcement on PCA's website, "this ends a multi-annual period of Polish curling community being divided".

That's true - the community has been divided for years. The reason for that was a strong disagreement from many curling clubs to actions taken by PCA. Accusations include:

Among the results of the division was the expulsion of opposing clubs from the ranks of PCA. They, in turn, formed their own organisation: Polish Curling Clubs Federation (Polska Federacja Klubów Curlingowych). One of the most visible achievements of this newly created entity was creating a national league – something that was never even brought up by PCA. PCCF continued their efforts to "civilise" Polish curling and they got some attention from WCF.

When the list of newly-admitted clubs was announced last week, it was in a middle of a trilateral meeting between WCF, PCCF and PCA. The goals of the gathering were to jointly create a new statute of PCA - one that meets all parties expectations. The agreement has not been reached and unilateral declaration about those clubs joining PCA was a surprise to everyone. The content of the list of those clubs was even more surprising.

It does indeed contain some important entities, such as clubs from Kraków, Katowice or Toruń, which are one of the oldest ones in Poland. And while it is definitely a good thing that the will finally have a say in elections for the only one officially recognized by the government curling organisation, the presence of other clubs on the list is doubtful.

As a counterbalance for 10 "real" curling clubs that have finally regained their memberships, there are 11 clubs that are questionable to say the least. For example:

With those clubs, PCA board holds the majority in upcoming elections in December. It is quite obvious that this is a "karate stunt" once again and has nothing to do with the democratisation of the association, requested by WCF. Hopefully, this crass violation of any standard will be noticed by some authorities (be it WCF or government) and it will be put to an end.

We hope that someday spirit of curling will be present not only on the ice but also in the organisation officially and legally representing our sport.